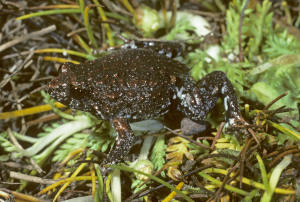 Over the past year, Living Links has been supporting Melbourne Water to boost citizen science monitoring of frogs through their Frog Census program. And it’s been a huge success!

This massive increase in records is largely thanks to the First Friends of Dandenong Creek, who have taken up the frog monitoring with great enthusiasm. Melbourne Water provided some initial training, but the group is now very independent in being able to carry out their own surveys. Frog Census Coordinator James Frazer also noted that the accuracy of reports submitted by the group have improved noticeably (citizen scientists are able to provide their own thoughts on identification at the time of recording, but all recordings are verified by frog experts).

The new records are providing invaluable data to better understand local frog populations, including identification of frog hotspots, building our understanding of key habitats, and better predicting which species will recolonise areas that are being restored. This is particularly important given the huge amount of environmental work being carried out along this section of the creek, including daylighting of an 800m section of the creek, creation of new billabongs, and revegetation of the creek corridor.

Some key results were:

Next year we will be looking to extend the frog surveys further downstream along the Dandenong Creek. Click here to download the Frog Census app and start monitoring frogs in your area. A results and celebration night is being planned for the evening of 26th September, at which all will be welcome. Stay tuned for details.