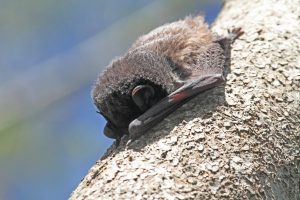 The night was crisp and clear when the twenty-two visitors met at the Picnic Centre before proceeding to set up the Harp Traps to capture insectivorous bats.

For those who have never seen or set up such nets, this is in itself most interesting. The traps are named “Harp” traps because there are a series of fishing lines threaded onto a rectangular metal structure, similar to the strings on a Harp. Beneath the strings hangs a canvas bag, which has inside a plastic flap where the bats sit after flying into the fishing lines and sliding unhurt into the canvas bag. The trap is placed beside a bat flyway, often near water where insects are found.

Back at the Picnic Centre, John delivered a most interesting talk with appealing slides on the various bats found along the Dandenong Creek Corridor. He pointed out that Victoria has resident at least one-third of the total microbat bat species in Australia, based on past surveys. The most abundant species of bats are insectivorous. There are 16 species in Victoria and Southeastern Australia. Insectivorous bats are generally tiny, unlike the fruit bats that regularly fly over the Park. People are not usually aware of their presence due to their nocturnal behaviour and their ultrasonic calls, which are inaudible to the human ear. He listed the possibility of seeing: Little Forest Bat, Chocolate Wattled Bat, Gould’s Wattled Bat, Lesser Long Eared Bat and White-striped Free tailed Bat.

We saw the Little Forest Bat (2) and Lesser Long Eared Bat, caught in the 2-hour period the nets were up. The Little Forest Bat weighs in at about 4 grams, less than a 10-cent piece and it can comfortably sit on one’s thumb! These little bats are commonly seen flying around our suburban streets consuming at least half their body weight in insects nightly. Between May and September, the bats go into a sort of torpor. Loss of habitat is affecting bat numbers. No one who witnessed the little bat held momentarily in John’s gloved hand could have failed to be charmed.

It was a fascinating insight to these tiny bats and for the majority, it was their introduction to the microbats. John and the children present managed to find Ring-tailed and Brush-tailed possums.

When we arrived to find a Little Forest Bat and Lesser Long Eared Bat in the net, we were delighted. Judith who had been standing beside the net during the talk in case of nocturnal runners or cyclists had seen many little bats flying around.

At nine o’clock, the activity ended as planned and the small children were more than ready to go home to bed to dream of little bats.

Visit the Australian Museum to learn more about microbats.

This event was supported by Living Links with funding through the ‘Transforming the Dandenong Creek corridor project‘ (in turn funded by the Victorian Government).