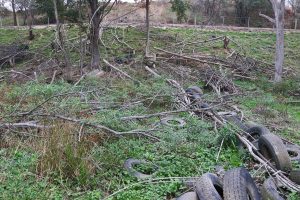 With funding through Living Links, the City of Whitehorse recently removed hundreds of tyres from the Dandenong Creek corridor and sent them for recycling. For many years, the site in Vermont South had been a dumping ground for tyres. It was also heavily infested with weeds before Council turned their attention to cleaning it up with the help of some hungry goats (see previous story). Once the goats had tackled most of the weeds, it was clear the tyres were the next problem to deal with in the quest to return the site to a beautiful natural area.

Removing the tyres was quite a challenge, given the steep bank and soft ground, according to Whitehorse Council’s Environment and Education Team Leader, Ian Moodie. “The biggest problem was an old earth moving truck tyre that weighed several hundred kilos.” He said. “It was a real problem dragging it up the hill, and also a real problem getting it into the recycling truck!” Overall, it took four people working for two days to remove all the tyres.

The photos below show the tyre removal efforts, including some before and after photos.

Over the next 10 months, the Living Links grant (with funding from the Victorian Government) will fund further weed control (including weeds that are too high for the goats to reach, or not palatable to them). This will pave the way for revegetation to start restoring the native vegetation, which will improve biodiversity values and amenity along this important biodiversity corridor, the Dandenong Creek.