‘Spreading the Message’ through public art 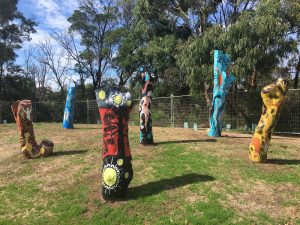 Living Links is delighted to have sponsored the creation of a brand new public artwork along the Dandenong Creek Trail. ‘Spreading the Message’, as the artwork is known, was recently completed by local Indigeous artist Ian Harrison, who is associated with ‘The Gathering Place’ in Doveton. The idea for ‘Spreading the Message’ was inspired by a project of the same name by the G21 Geelong Regional Alliance, which produced a fantastic resource booklet that we referred to.

Located at Tirhatuan Park, Dandenong North, the artwork features eight large tree trunks that were salvaged from unavoidable tree clearing operations throughout the City of Greater Dandenong. These have now been given “new life” through detailed paint work. Each of the eight ‘totem poles’ has it’s own unique colour, design and story, although some key themes weave through them all, including symbols for water, campsite, men, women and animals.

Ian works mainly in paint, but also dabbles in wood burning. His art is inspired by a desire to share culture, particularly with young people. ‘Spreading the Message’ was his first outdoor public artwork and he has found it to be a really positive experience.

“I’d often go there in the evenings to work on the paintings. Sometimes I’d be there until dark. It was so nice and quiet there, nice to sit there and hear the birds. It was good.”

Ian has a long connection to Tirhatuan Park, having worked as a mowing contractor there around 20 years ago. He said it was a very different experience coming back as an artist. During the eight weeks it took to complete the artwork, Ian said he often had passers-by stopping to have a look, chat and take photos.

The project was coordinated by Phoenix Wolfe, Conservation Projects Officer at the City of Greater Dandenong, and he couldn’t be happier with the result.

“There’s so much good feedback coming back from the community!” he said. “Whenever I’ve been out there, almost everyone who walks past comments on how much they love it; that it brings colour to the park, and that they’re pleased to see Aboriginal culture being represented in our parklands.”

“Dandenong is very lucky to have this artwork at Tirhatuan Park. Many people will come to see it – it’s going to be a destination in itself.” he concluded.

‘Spreading the Message’ was originally scheduled to be launched at the ‘Discover Dandenong Creek Festival’ on 2nd April, which was cancelled due to the current global situation. However, we are hoping to reschedule the festival and the launch to spring or early summer. Please sign up for our email updates to stay up to date.

In the meantime, we hope the photos below provide an enjoyable introduction to this fantastic new artwork:

This project was delivered by the City of Greater Dandenong with a grant through our Living Links ‘Transforming the Dandenong Creek corridor‘ project (funded by the Victorian Government).