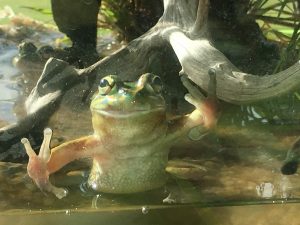 On 30th June, the City of Monash hosted a fantastic event at Mulgrave Reserve, Wheeler’s Hill. Check out this short video and see the report and photos below provided by Monash Sustainability Education Officer, Anna Mezzetti.

200 people registered to be part of the Mulgrave Wetland Wonders Day at Mulgrave Reserve. The aim of the day was to introduce residents to our unique wetland environment and the myriad of wildlife that live in our urban area, as well as inspiring our next generation of environmental stewards.

Children and adults of all ages enjoyed meeting live local frog species, discovering the smallest water bugs from the wetlands, went on frog and bird walks, learned about indigenous culture and bush tucker and had fun with frog craft activities. The BBQ was busy throughout the day. Melbourne Water kindly provided staff and equipment for the waterbugs activity. The bird walk was facilitated by Joab Wilson from Holmesglen TAFE’s Conservation and Environment course, Christina from ‘Leap into Nature’ ran sessions on frogs, Colin Atkinson from Wolithiga Wares chatted to people about indigenous culture and took people on a bush tucker tour, and Black Snake bought along their display of local frogs so people could get a close up look of a live frog. Roberto from the Connies was there too, giving out beautiful animal swap-cards and engaging people with fascinating stories. We received very positive feedback about the day, and were delighted to see families of all ages learning together in the natural environment.

The Wetland Wonders day was also the kick off for a new “Friends of” group. This group will be formed in response to feedback from the Mulgrave Masterplan Consultation that showed a strong interest in a group for Mulgrave Wetlands. Several people expressed an interest in being part of the new habitat improvement group, which we will model on the structure behind the successful Skink Link Project group. The new group will have an icon animal species, be involved in the planning of habitat improvement stages, planting events and the design of interpretive signage.

To get involved in the new friends group, please email Anna at Anna.Mezzetti@monash.vic.gov.au

This event was supported by Living Links with funding through the ‘Transforming the Dandenong Creek corridor project‘ (in turn funded by the Victorian Government).